The Last Mystery Of Kristo Vampiro

Director Khavn De La Cruz Screenplay Carlos Piocos III, Khavn, Arvie Bartolome Cast Dante Perez Cinematography Albert Banzon Music Kristine KintanaProduction Kamias Overground Lenght 70’ Language Tagalog with English subtitles Country Philippines Year 2012 Genre Drama[/tab] [tab]“Experimental filmmaker Khavn de la Cruz claims that Misericordia was shot on a four-day trip in the Philippines, during which he recorded his family through a blood-red filter and accompanied violent images of cockfights or flagellant rituals with no less bloodthirsty hallucinatory voiceovers.Khavn presents a blood-filled point of view of the Filipino culture of pain and suffering. Even if most of the film had not been shot through a red filter, this colour would still dominate.[/tab] [tab]Khavn De La Cruz is a multi-awarded and internationally renowned filmmaker, composer, and writer.  Because of his polyhedric, multifaceted work is defined in many different ways as “the Lars von Trier of the Philippines” (Julien Fonfrede, Montreal Festival Of New Cinema), “the new Takashi Miike. The Philippine counterpart of Peter Baiestorf” (Mondo Paura), “the world’s most prolific major filmmaker” (Variety), “a rock ‘n’ roll filmmaker with the sensibilities of Buñuel” (Ricky S. Torre, GMA News), “a punk rebel” (Die Presse). He has thirty-three features and more than a hundred short films under his belt, including Mondomanila (Rotterdam 2012), The Muzzled Horse Of An Engineer In Search Of Mechanical Saddles (Berlinale 2008), Manila In The Fangs Of Darkness (Viennale 2008), and Squatterpunk (Rotterdam 2007).  Once the proprietor of the late 90s go-to place for local artists Oracafe, Khavn has been called the father of Philippine digital filmmaking. He is the president of Kamias Road, an independent film, music, and publishing company. [/tab] [/tabcontent] [/tabs] 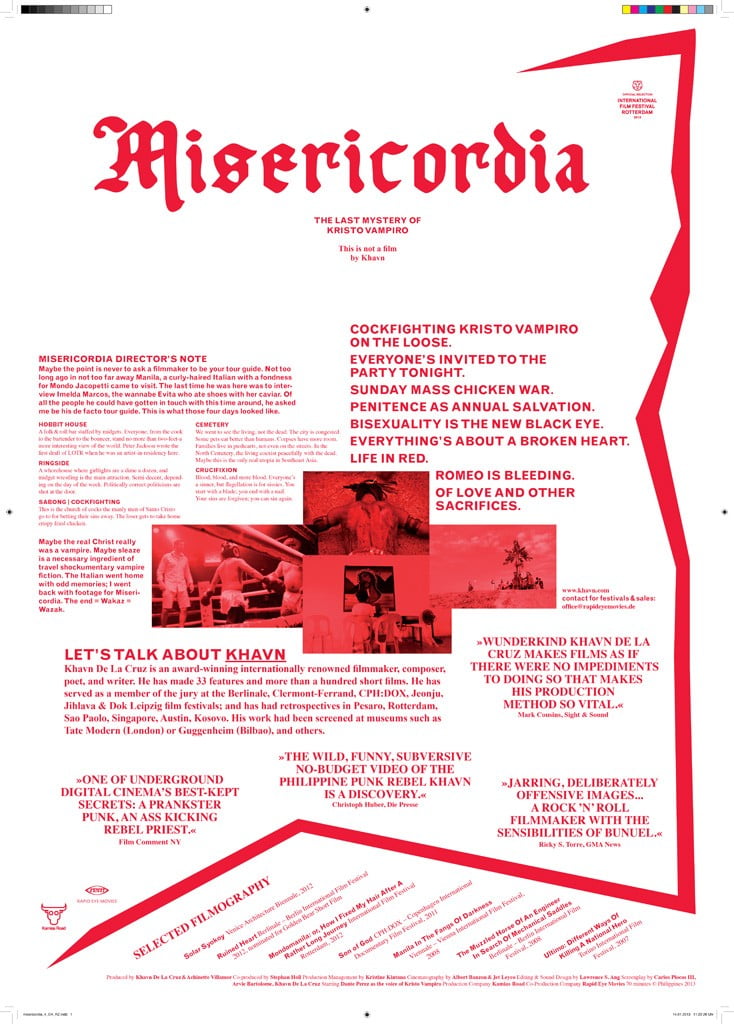