Fe returns home to the Philippines after several years of working overseas, her job a victim of global economic shifts. Greeted by her husband Dante (Nonie Buencamino), the young lady come back to a long history of domestic violence fuelled by rage and long-term impotence, quickly discovering her time away has not changed him. The couple works in a factory making baskets where Fe becomes the lover of Arturo the man who manages the company. Torn between two men who cannot give her what she needs and wants, Fe’s frustration leads to take desperate steps to establish her independence. Produced in cooperation with Manila’s Women’s Crisis Center, Ang Panggagahasa Kaye Fe (aka The Rapture of Fe) won a special award for digital feature films at the 2009 Cairo International.

Dr. Alvin Yapan, Ph.D. currently chairs the Filipino Department of the School of Humanities at the Ateneo de Manila University, won many awards in literature: four Palanca Awards for Excellence in Literature, a National Commission for Culture and the Arts Writers Prize and the National Book Award. After mastering the art of storytelling on paper, he wrote his first screenplay with his first short film, Rolyo, which won the best short film in the 2007 Cinemalaya Philippine Independent Film Festival and the 2008 Gawad Urian Awards. His first feature film Ang Panggagahasa kay Fe (The Rapture of Fe) took home the Golden Prize Award for Best Digital Feature Film at the 33rd Cairo International Film Festival and the Special Jury Prize at the 2009 Cinemalaya Philippine Independent Film Festival.
[/tab] [/tabcontent] [/tabs] 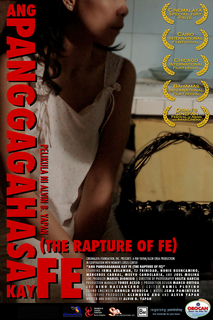