During the night Kommander Kulas dreams that he is a giant cockroach. When he wakes up, he finds stitches on his chest: someone has stolen his heart during the sleep. With his best and only friend, the Poor Carabao, Kommander sets-off for an adventure in search of his heart passing through the long and unwinding road of Kamias, among the vast landscape of Philippines, encountering mythogical and tarots figures. A balanced, even minimalistic work, far from usual rough language by Khavn De La Cruz, that underlines the link with Alejandro Jodorowsky, cult director from Chile, showing also the waste range of poetic of KHAVN.

]Khavn de la Cruz is a multi-awarded and internationally renowned filmmaker, composer, and writer.  Because of his polyhedric, multifaceted work is defined in many different ways as “the Lars von Trier of the Philippines” (Julien Fonfrede, Montreal Festival Of New Cinema), “the new Takashi Miike. The Philippine counterpart of Peter Baiestorf” (Mondo Paura), “the world’s most prolific major filmmaker” (Variety), “a rock ‘n’ roll filmmaker with the sensibilities of Buñuel” (Ricky S. Torre, GMA News), “a punk rebel” (Die Presse).He has thirty-three features and more than a hundred short films under his belt, including Mondomanila (Rotterdam 2012), The Muzzled Horse Of An Engineer In Search Of Mechanical Saddles (Berlinale 2008), Manila In The Fangs Of Darkness (Viennale 2008), and Squatterpunk (Rotterdam 2007). Once the proprietor of the late 90s go-to place for local artists Oracafe, Khavn has been called the father of Philippine digital filmmaking. He is the president of Kamias Road, an independent film, music, and publishing company 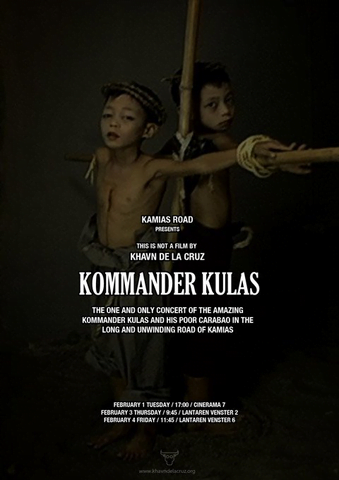